Over Thanksgiving, on our way to Princeton from Baltimore, we stopped at the Hagley Library in Wilmington Delaware to look up one of Toledo’s most famous artists, Edmund H. Osthaus, painter of dogs. The Hagley is renown for its archives of early American industry, centering upon the history of America’s first large corporation: The Du Pont Company. Next to the library is the Hagley Museum. It’s more like a living museum, consisting of Du Pont’s large village of restored nineteenth-century powder mills and yards.  The Du Pont Company manufactured explosives and gunpowder.

Back in 1992, it was The Hagley Museum and Library where I first experienced the joys of historic research, and where I became hooked. My initial contact with the library came soon after I learned that my great great grandfather, Pierre Gentieu, was a photographer. The library owns his photo collection. I called the library and the pictorial curator, Jon Williams, sent me xeroxed pages from a book regarding Pierre’s photos and his work for Du Pont. He said that Pierre’s photographs were integral to the restoration of the Hagley Museum in the 1950’s. I surmised that Pierre was considered a bit of a rock star at the Hagley. Because of Pierre, I felt like they rolled out the red carpet and that was pretty cool! It was a great beginning to a long and fascinating journey into the research of my photographer ancestor.

It felt similar last week after I enquired about Edmund Osthaus. My last-minute email to Max Mueller, imprints curator at the library, asking to research Edmund Osthaus the following day resulted in a rolling cart carrying folders of original source documents and precious items from the pictorial collections, as well as introductions to the new administration director, Joan Reynolds Hoge-North, and to Debra Hughes, the curator of the museum (incidentally, who is not only from Michigan but from Ann Arbor as well, my favorite getaway close to Toledo.) My research at the Hagley has only just begun…

Edmund Osthaus, who came to Toledo in 1886 at the invitation of David R. Locke (creator of the Petroleum V. Nasby letters) to head up the brand new Toledo Academy of Fine Arts, who then became a charter member of The Tile Club group of artists that dreamed up the Toledo Museum of Art, was in his 30’s in the 1890’s when Du Pont first commissioned him to create paintings of hunting dogs for advertisements for their new product, “smokeless” powder. Osthaus and Du Pont enjoyed a prolific association for about 20 years until around the time of WWI when Du Pont transitioned from manufacturing explosives to chemicals. Du Pont used Osthaus’s watercolor and oil paintings for postcards, signs, calendars and reproductions that were displayed in hunting lodges and clubs across the country. This exposure undoubtedly did quite a bit to boost Osthaus’s fame. I’m curious, how exactly did it happen?

Among the archives at the Hagley were handwritten letters from Osthaus’s son Franz and other relatives. I learned that Nina Stevens, the assistant director and wife of George W. Stevens, the first director of Toledo Museum of Art, and Osthaus’s wife, Isabel Carlton were cousins, and there was a suggestion of a rift with the Toledo Museum that apparently only Franz would know. Juicy!

The Hagley Museum and Library is a very cool place. Not only was it key to my discovery of a personally significant link to an ancestor, but now I find it to be the repository for a cache of information on an important “branch” of Toledo’s communal artistic family tree. My Pierre project lasted a good 15 years, resulting in a manuscript and “maquette” for a book that I hope someday to publish. Working on Artists of Toledo.com conjures up all the wonderful feelings I had working on my ancestor project, and I don’t even have to worry about getting it published as a book because as a “work in progress” website, it’s an ongoing publication that is instantly accessible to the world, yet could be a never-ending project for me. I consider it my giant Pierre project.

(I wonder if Pierre ever met Edmund Osthaus, after all, Pierre worked in the Du Pont office until his retirement in 1912. That would be amazing! Okay, I admit, it would be amazing only to me!)

Today we went to St. Vincent’s Hospital in search of information on Paul Kremenik, the armless artist who lived at St. Vincent’s for 27 years. We were directed to the library and immediately after we asked if they had any information on the armless painter who lived there until 1958, the librarian lit up and said you must talk to Pamela Bayer, the Mercy Regional Librarian Manager. We were directed into Pam’s office, where we saw three paintings by Kremenik leaning against cabinets. Pam explained that, at that exact moment, she was in the midst of organizing a show of his work.
Her curiosity about Kremenik had been peaked by a painting of a dog that had been an iconic painting hanging in the hospital for decades. It was this painting that made her interested in finding out about the artist. When she discovered that he was armless, and lived right there in the St. Vincent’s ward and painted with a brush in his mouth, she thought, how amazing, and how nurturing the hospital was. So she found other work and information on him…she was very surprised that we came asking about him — and as for my project, I hit pay dirt — she allowed me to photograph the three paintings in her office, and will be sending me jpgs of more, both paintings and information…
And incidentally, Pamela Bayer is related to Toledo’s famous folk artist, Harold Everett Bayer (1900 – 1996) who is represented in the American Folk Art Museum in NYC. 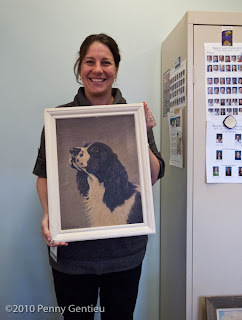 I saw artwork on my friends’ walls, and I was interested in knowing more about the artists, so I looked them up at the library. I’d see Abramofsky, John Noble Richards, Earl North, Ruskin Stone, Joe Ann Cousino — these were some that I noticed early-on and whose style I could always recognize.

My mother, Audrey Gentieu, passed away last year. She was a really good artist. When she was young she had a teacher who was a well-known artist, Karl Kappes, and he had other students who became well-known artists, including Earl North and Ruskin Stone. It amazed me when I first looked up Kappes — he was born in 1861 and studied in Germany and Paris. Only then did I fully understand my mother’s refined sense of color and impressionistic style.

Toledo has such a rich history of artists. It was artists themselves who created the Toledo Museum of Art. They got together a group and decided to call themselves the Toledo Museum of Art without owning a single work of art or having a location or a bank account. With such a lofty name they had to live up to it, and within just a few years they had their museum. My logo for Artists of Toledo is inspired by a story by Thomas Shrewsbury Parkhurst, an artist in the Tile Club and a journalist, about how they raised their funds. The story goes like this — the museum had but one painting, and nowhere to put it. They placed the painting on the floor, and borrowed a chair to put in front of it. Then they invited all their well-to-do friends to sit in the chair, one by one, as they espoused the virtues of building a museum for the citizens of Toledo, and how awful it would be for the future of Toledoans if there would be no art museum. So the museum raised thousands of dollars this way, which Edward Drummond Libbey matched and tripled.

Toledo is a big city yet small enough to be embraceable. The history is not too daunting that you cannot take it all in, and it’s extremely interesting to put in perspective the several generations of matured artists with their careers behind them. It’s all so connected with the community and I love finding the descendants of these artists and getting to see the treasures that they have.

The history of the museum is really interesting. Created by artists, it was further defined and developed by the visionary modernist couple, George and Nina Stevens, and in turn it has nurtured many thousands of young art students, some who grew up to have long notable careers in the arts such as Edith Franklin, Paul Perlmutter, Joe Ann Cousino, LeMaxie Glover and Robert Freimark. The museum used to reward these artists with one-man art shows in Gallery 21 and Gallery 8. Instituted by Nina Stevens, local one-person shows were a regular thing, and they were monthly from 1933 to 1970.

With the one-man shows at the art museum came press for the artists in the form of announcements and reviews in the paper, parties and coverage of such parties in the society section, personal telegrams, congratulatory notes, flowers, and sales — lots of sales. It did a great deal to spur the artistic growth of the artists, as well as of the community. Now all of that is gone. If artists don’t have inspiration and reward, it’s hard to keep it going. There is no bar to raise, there are no challenges to rise to.

It’s difficult to buy art. People need a little help; some education. I’d like Toledoans to get to know the treasures they have around them and the talent that Toledo itself has spawned — and that’s why I am making artistsoftoledo.com.