Mary Wolfe and art: “This is what I imagine heaven will be like.”
Mary Wolfe died last Thursday. At 82, she still seemed to be in her prime. What a magnificent woman. She was extraordinarily bright, both in her intellect and aura. She will keep shining through the many gifts she and her husband, Frederic (Fritz), have bestowed upon the community.
She was an art history teacher at Bowling Green State University from 1968 to 1976. She always opened her house to students and artists, said her student Kathy Sobb, an accomplished New York City graphic designer. She then became the exhibitions director of the BGSU McFall Center Gallery through the mid-eighties. Relevant to this website, artistsoftoledo.com, Mary Wolfe showed the work of glass art pioneer Dominick Labino. She also put on the largest exhibition of Edmund H. Osthaus ever assembled. Osthaus (1858—1928), famous for his dog paintings and branding of the Du Pont Powder Company (see my blog post, Edmund H. Osthaus and my giant Pierre Project), was one of the founding artists of the Toledo Museum of Art.
The couple donated $1 million to Wilberforce University for a new administration building in 1993. (Another artistsoftoledo connection: one of the few known paintings by Frederick Douglass Allen and one that I have been trying to track down was of the 1934 president of Wilberforce.)
Mary Wolfe is well-known for the very generous contribution she and Fritz made that started the Wolfe Center for the Arts at BGSU. We can also thank the Wolfes for interesting architecture of the building, since they encouraged BGSU to hire the architecture firm, Snohetta, of Norway. The Wolfe Center opened in December 2011. Six months later, at the Toledo Museum of Art, the Wolfe Gallery for Contemporary Art opened, thanks to the Wolfes’ $2 million donation to the Museum for the renovation of the old glass gallery behind the Egyptian gallery that had not been used for 15 years.
For interesting accounts of the many roles she played throughout her life, see these two tributes to Mary Wolfe that were published shortly after her death by The Blade and Bowling Green State University.
I love the quote that was in the earlier, Blade breaking news report, taken from a 2011 Blade interview in regard to her art patronage. Mary Wolfe said, “It’s made life so much more interesting and wonderful for us. It gives you a great feeling.” How lovely to know this, how the Wolfes felt about art collecting and their kind act of supporting the arts, since what they have given us has truly made the lives of an entire community much more wonderful and interesting and gives us a great feeling.
I am grateful to have known her. She and Fritz came to my daughter, Anna Friemoth’s opening at the Paula Brown Gallery last year and bought her work. It means so much, since I know they have such exquisite and discerning taste in art.
Two years ago, my husband and I were invited to a small studio tour of Austrian LED light artist Erwin Redl, currently living in Bowling Green, with Mary & Fritz Wolfe and two of their three daughters and a mutual friend. Erwin Redl’s studio is in a huge warehouse, divided into several rooms. Erwin creates conceptual light installations for international museums. The experience of the work in each room of his studio tour became progressively grander and more energetic.  It was pretty special to be experiencing this tour with the Wolfes and I could see that Mary Wolfe was inspired. Later, her daughter Lisa told me that her mother was absolutely taken by the installations, and especially the last room, that had streams of red lights and blue lights speeding rhythmically from wall to wall close to the ceiling. Mary remarked about the last room, “This is what I imagine heaven will be like!”
I was just getting ready to send Mary Wolfe a card for my upcoming show, Artists of Toledo at the Paula Brown Gallery, that opens November 13. I printed some snapshots from that night at Erwin’s, together with a note. I had them out on my table waiting to find the right sized envelope when I read the Blade report that she died. I had just been with Lisa two days before at Bowling Green State University and later I sat in the theatre in the Wolfe Art Center for a scholarly talk on animal vision. It was a celebrated event and the audience included many VIPs but Mary Wolfe wasn’t there as I thought she might have been. She had a stroke that evening and died the next day, surrounded by loved ones.
Our prayers go out to Mary’s family, her many friends, and to our entire community. We lost someone pretty wonderful. We will always remember her because she brought so much art to life. 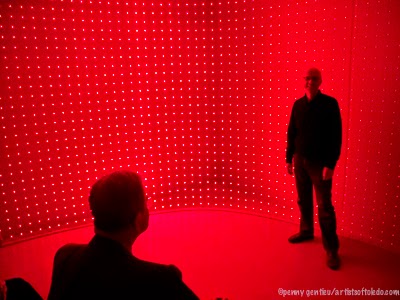 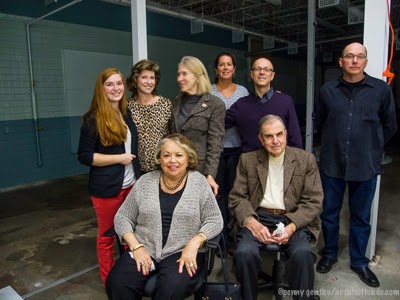 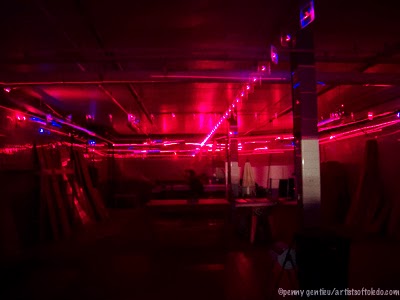